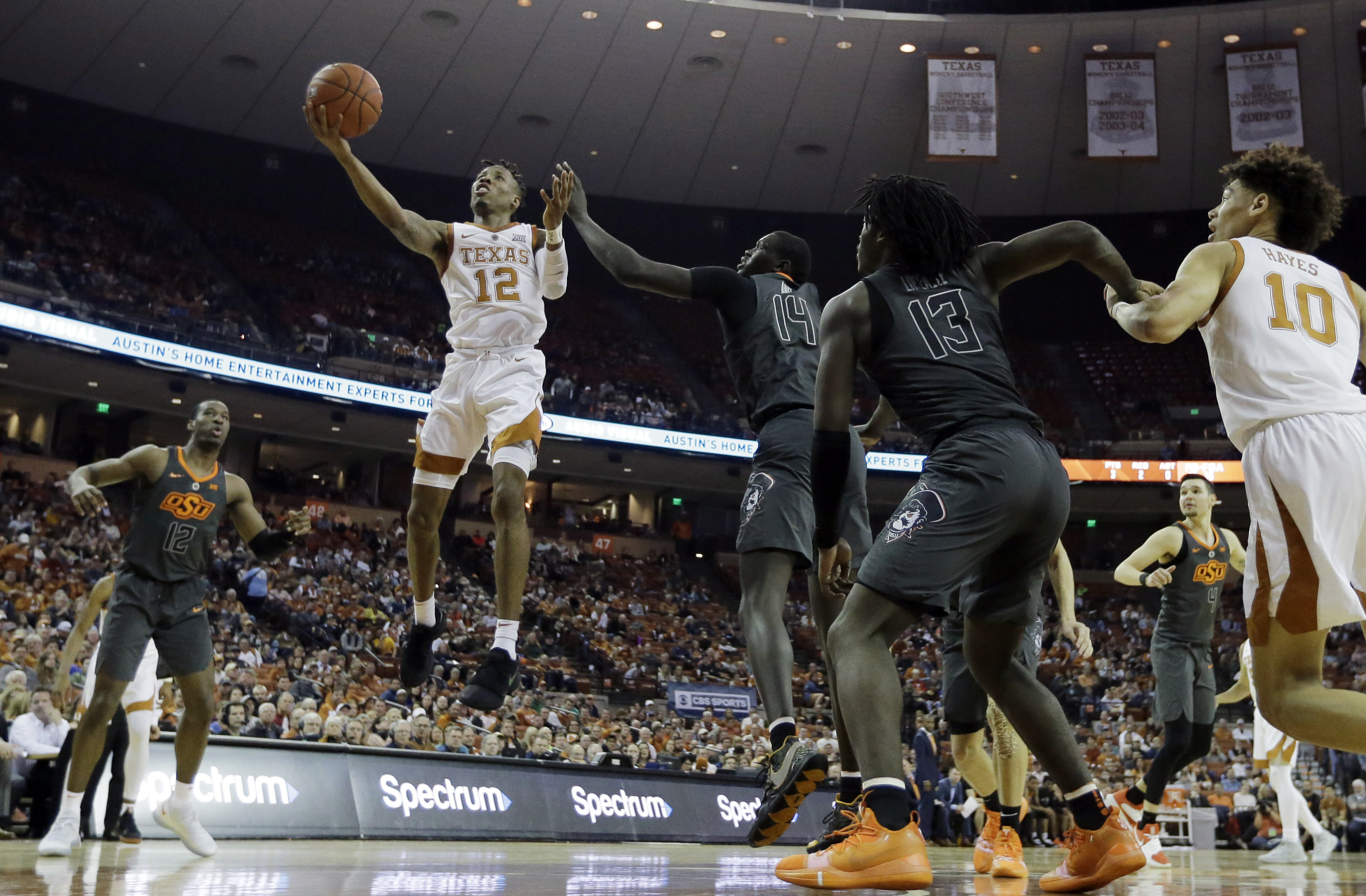 By JIM VERTUNO, AP Sports Writer
AUSTIN, Texas (AP) — In a Big 12 season of ups and downs for Texas, none was more befuddling than an early loss to last-place Oklahoma State.
The Longhorns made sure there would be no repeat on Saturday.
Kerwin Roach II scored 16 points, Dylan Osetkowski scored 14 on 5-of-5 shooting a 69-57 Texas win that sent the Cowboys to their fifth straight loss and eighth loss in nine games.

“It was our emphasis today to come out, just be aggressive, don’t take these guys lightly,” Roach said. “Respect them. They beat us the first time. We wanted to pay them back.”

Oklahoma State (9-16, 2-10) jumped on Texas early the first time the teams met and looked to do it again with a flurry of 3-pointers, including three by Thomas Dziagwa. Texas responded when the Longhorns pushed out to defend further on the perimeter, and Oklahoma State made just one from long range over the final 9 minutes of the first half.

Dziagwa finished with 23 points behind seven 3-pointers.
“We just shut down everybody else,” Roach said. “We made it tough on him, too, but he still made some tough ones.”
Texas (15-11, 7-6) led 20-19 before closing the first half on a 19-7 run punctuated by Roach’s 3-pointer from the corner with 1 second left in the half.

Texas led by 13 early in the second before the Cowboys cut it 42-38. The Longhorns responded with three straight baskets and a 3-point play by Courtney Ramey to end the threat.

Oklahoma State coach Mike Boynton dismissed three players for team rule violations after a 2-3 start in the Big 12 that included the previous win over Texas. The Cowboys are down to just seven scholarship players.
“That’s kind of a moving target. I put a walk-on on scholarship, but he broke his foot,” Boynton said. “(Texas) has players who weren’t even dressed that could start for us … I still sense a very frustrated group that feels like it cannot win.”

BIG PICTURE
Oklahoma State: The Cowboys had very little working offensively when Dziagwa wasn’t firing away from long range. They were 12 of 30 inside the arc and went 9 of 18 from the free throw line. Dziagwa was 0-6 when he wasn’t shooting 3-pointers.
“Even on a night we make eight (3-pointers) we still don’t get to 60 points,” Boynton said.

Texas: The Longhorns will like the confident shooting stroke from Osetkowski, who came in just 2 of 21 shooting 3-pointers in the previous nine games. He made two from the same spot in right corner in the first half, then made another with 7:12 to play that put Texas ahead by 10. His ability to score away from the basket will be key to the Texas offense over the stretch run of the season.

Osetkowski’s three 3-pointers were his season high.
“I’m looking for seven 3s like I did last season at Iowa State,” Osetkowski said. “It’s great see some going in.”

SCORING DEPTH
Texas’s deeper bench made a big difference. While Oklahoma State had four players log at least 38 minutes and two — Cameron McGriff and Lindy Waters III — played the entire game, Texas has only two players on the court for more than 30 minutes.

“Those guys gave us a real lift in terms of spirit and energy,” Texas coach Shaka Smart said. “We wanted to take advantage of the fact we had more depth.”

UP NEXT
Oklahoma State hosts TCU on Monday. The Cowboys lost the previous matchup 70-68.

Texas plays Oklahoma Saturday, looking for a season sweep over the Sooners. Texas won the previous meeting 75-72 when the Sooners missed a 3-pointer in the final seconds.

Tom Herman’s Next Class
Longhorns Youth on Mound Strength in 2019.