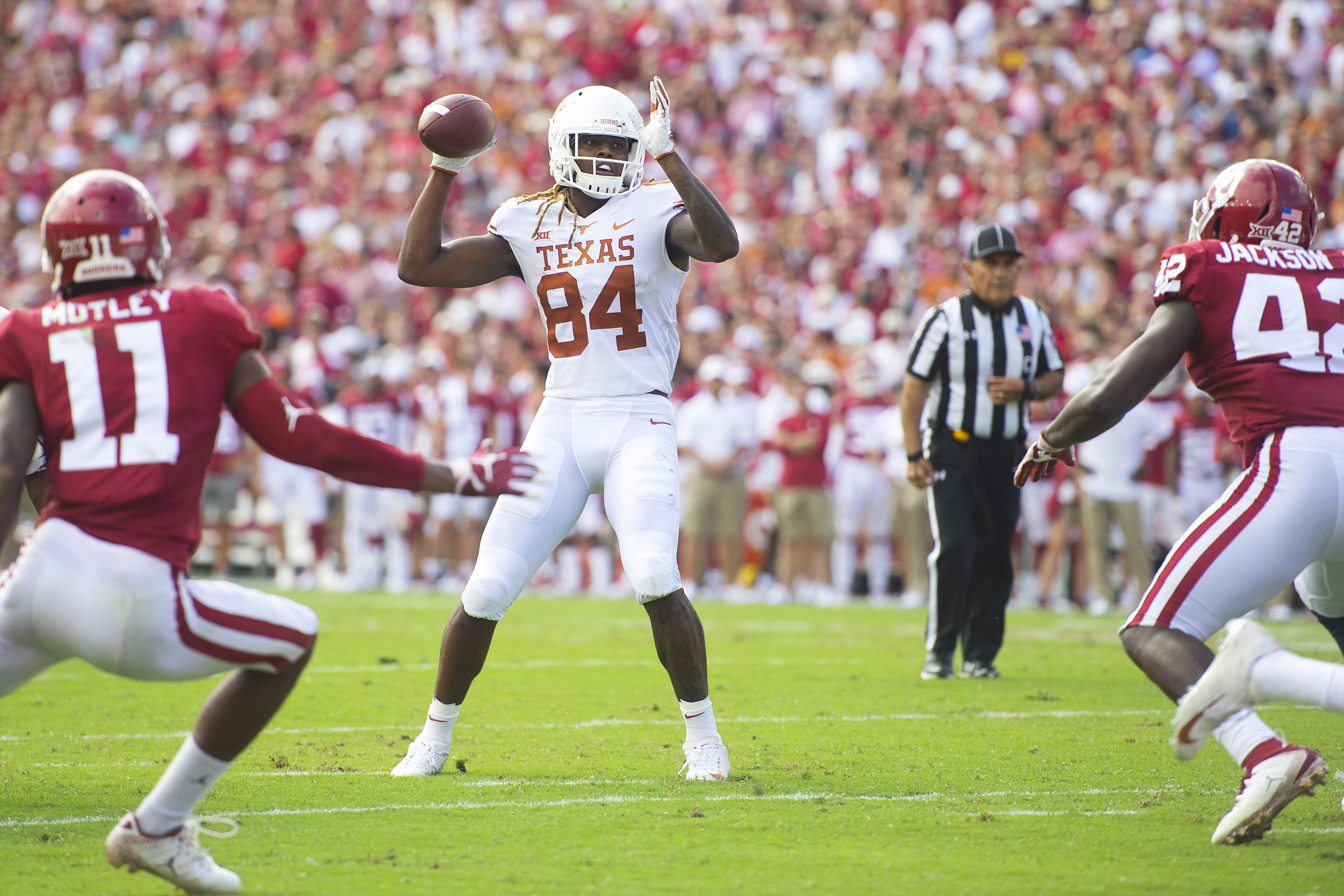 Texas has options to replace Lil’Jordan Humphrey in slot

Texas has options to replace Lil’Jordan Humphrey in slot

Lil’Jordan Humphrey wasn’t exactly expected to become a generational talent at Texas, though that’s essentially what he ultimately evolved into. In 2016, Humphrey stepped foot on the Forty Acres hardly ranked within the top 400 in his class. In 2018, Humphrey capped his tenure at Texas with 86 receptions for 1,176 yards, ranking as the fifth- and third-best single-season efforts in school history, respectively.

Humphrey rewarded himself accordingly, announcing his departure for the NFL after three seasons in Austin, which, in turn, leaves the Longhorns looking elsewhere in hopes of replacing even a notable portion of Humphrey’s substantial productivity.

Save for a considerable surprise, no single player is going to match Humphrey’s 2018 campaign in the slot. Rather, we’re almost certain to see contributions by committee and to that end, Texas isn’t without top-tier talent at slot receiver, albeit raw, tremendously inexperienced talent.

On paper, Texas will present one former high school All-American after another, but of the options the Longhorns are expected to have on hand, only one has semi-notable collegiate experience in the slot — Joshua Moore.

A former top 100 talent out of Yoakum, Moore saw action in six games last season before missing the Baylor game due to illness, and ultimately, suffering a shoulder sprain in practice that sidelined Moore for the remainder of his freshman season. Prior to that point, Moore hauled in just seven receptions for 53 yards and one score, but he boasts that kind of blazing speed and open-field shiftiness that’s typically preferred in the slot, which has helped him maintain the starting role throughout the spring.

As we learned last season, though, that speed isn’t an absolute requirement for the Longhorns, in particular, so the experience edge Moore owns may be his biggest benefit over an option such as early enrollee Bru McCoy.

The top-ranked athlete in the 2019 class, per the 247Sports Composite, and the recipient of prestigious honors such as the Maxwell Award and the MaxPreps National Player of the Year, McCoy originally inked his NLI with USC in early January, only to transfer to Texas weeks later in the aftermath of the tremendously short-lived Kliff Kingsbury era in Los Angeles. In doing so, McCoy suddenly provided Texas with a seemingly ideal replacement for the hybrid slot the Horns had in Humphrey last season, which is exactly the pitch Texas put forth throughout the recruiting process.

“That’s what we talked to him about (during the process), what role you can fill for us,” Texas receivers coach Drew Mehringer told 247Sports Steve Wiltfong. “They’re similar body types, LJ is a little taller, Bru a little faster, similar skill sets and I was like oh my god, LJ is in the draft I got a great role for you.”

Though the 6’3, 215-pound McCoy doesn’t fit the mold of your stereotypical slot on paper, the same could have been said of Humphrey — Texas simply found a role for him to ensure one of their top talents was on the field. As Texas aims to fill the void Humphrey left behind, expect the Longhorns to look to do much of the same with McCoy, who utilized his physical, yet shifty skill set to the tune of 1,428 yards and 18 touchdowns last season.

That is, of course, contingent upon McCoy’s pending eligibility appeal, as he’s technically a transfer and would be required to sit out next season without a waiver.

Fortunately for Texas, the Horns are set to have an embarrassment of riches at slot receiver, and maybe the most ideal fit is still yet to step foot on the Forty Acres.

One of the first members of Texas’ 2019 class, Scottsdale (Az.) Notre Dame Preparatory receiver Jake Smith, too, will arrive in Austin with some hardware, as the top 50 talent nationally took home honors as the Gatorade National Player of the Year. The recognition came after the four-star pass-catcher compiled 1,112 yards and 22 touchdowns through the air and another 741 yards and 15 scores out of the backfield — and Smith produced this in addition to his efforts as a punter, punt returner, kick returner, and defensive back.

“Jake Smith, the numbers speak for themselves. He’s a Gatorade National Offensive Player of the Year,” Herman said during his early signing day press conference. “He can do everything: run it, catch it, return it, play DB, I’m sure he could drive the bus to the away games if you needed him to. Multi-sport athlete. Excels at lacrosse, as well. Just excited about his versatility.”

In terms of skill set, the 6’1 Smith boasts elite burst, notable cut-and-go ability, more than his share of shiftiness in space, and the kind jaw-dropping speed that may be unparalleled by any receiver on the roster. In one word, Smith is dynamic, which is something that could prove to be an ideal complement to an otherwise largely big-bodied receiving cast featuring talents such as Collin Johnson (6’6), Malcolm Epps (6’6), Brennan Eagles (6’4), Al’Vonte Woodard (6’3), and McCoy (6’3), just to name a select few.

The issue at hand for Smith, of course, is that he’s a summer arrival aiming to vie for reps in a receiver room that will already feature the two aforementioned elite prospects in Moore and McCoy.

That said, Smith presents plenty of elite potential in his own right, providing Texas with yet another option at a position that will almost certainly see contributions by committee, as opposed to an outright feature slot as Texas has last season in Humphrey.