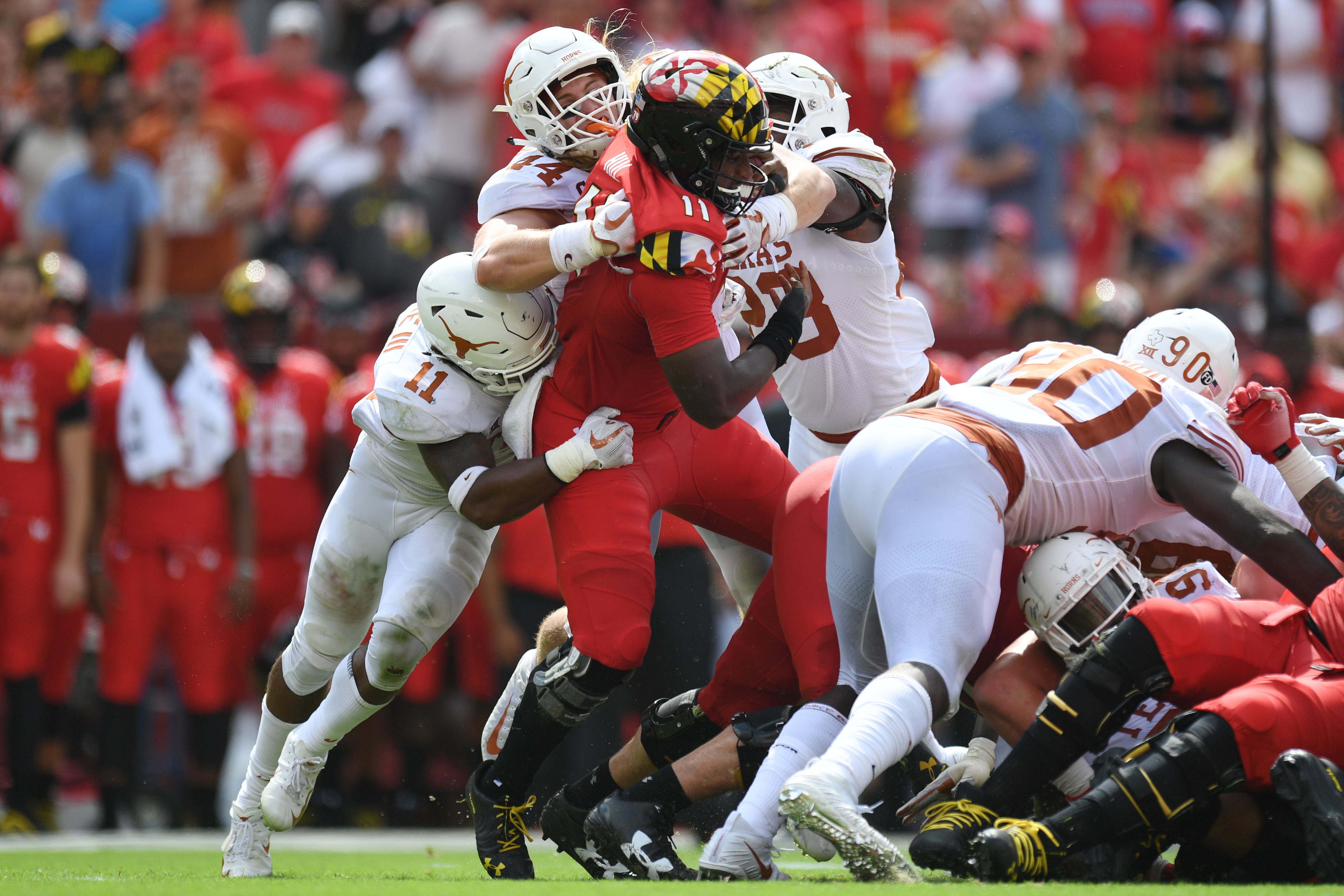 Texas allowed one to slip away Saturday to open up the season against Maryland losing 34-29 at FedEx Field home of the Redskins. Maryland freshman Jeshaun Jones showed out with his own hat trick catching, throwing, and running for a touchdown. The game began with a moment of silence for the Maryland’s fallen teammate Jordan McNair who died of a heat stroke in the spring. Once it all started the revenge game from last year’s upset loss slowly went out of reach. Where did it all go wrong?

On their first possession, Maryland exploded with a few big plays that put Texas on their heels with a Taivon Jacobs twenty-three yard pass then Jeshaun Jones capped off the drive with a twenty-eight yard run into the endzone. The defense was unable to figure out what was going on early on.

After back to back punts Texas gained great field position as Brandon Jones returned it to the Maryland’s thirty-nine yard line. The Longhorns on their very first play, Sam Ehlinger connected with Devin Duvernay for thirty-nine yards to tie the game 7-7. It seemed the game was evenly matched with each team creating big plays against the defense early.

Jeshaun Jones would keep it going catching a Kasim Hill sixty five yard touchdown by the eight minute mark of the first quarter. Maryland ran away with the game in the second quarter once Jeshaun Jones threw a touchdown to Jaivon Jacobs to take a 24-7 lead.

The ejection of linebacker Gary Johnson and the first half suspension of Anthony Wheeler contributed to a decimated defense.

Texas responded with a Keontay Ingram touchdown, a Terp’s safety, and a beautiful throw to a leaping Colin Johnson to trim the lead 24-22 that changed the momentum of the game at halftime.

The third quarter went underway as both defenses held firm to force punts. Texas was able to stop the Terps on a fourth down when Hill attempted to run for the first down. Sam Ehlinger came out and completed another completion to Colin Johnson at the two yard line. Kyle Porter stepped into the endzone to give the Horns their very first lead of the game 29-24 towards the end of the quarter.

The elements came at the beginning of the fourth to cause an almost ninety minute weather delay. After mother nature left the Terp’s went on an eleven play drive to take back the lead. Tayon Fleet-Davis scored on a seventeen yard run that took a ton of time off the game clock.

Impatiently Texas tried to come back forcing an interception and a fumble with less than five minutes left in the game.

Maryland was able to squeeze a field goal to go up by five and made the decision to run out the clock that Texas was able to stop with three minutes left to play to give the Horns one more drive for a comeback win.

Ehlinger completed a seventeen yard completion to Lil’ Jordan Humphrey to midfield and a fourth down thirteen yard conversion to Duvernay. It looked like a Ehlinger game winning drive, but on their final play he rushed out to the right side of the field launched it over his intended receiver’s head and was caught by a Maryland secondary player; A gut blowing loss to start the season.