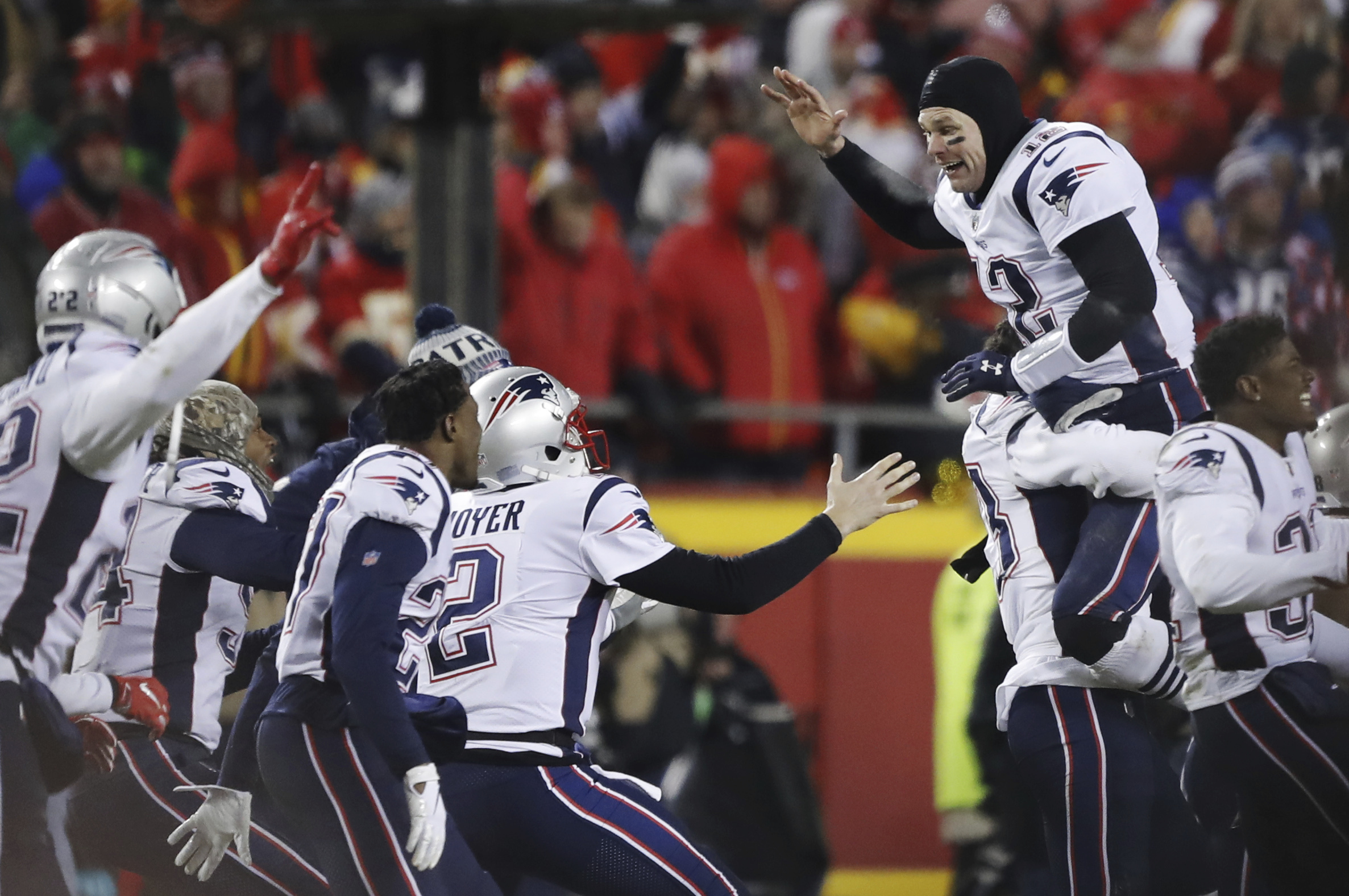 The drive, during which New England had three third-down conversions, against an exhausted defense was reminiscent of when the Patriots beat Atlanta in the only Super Bowl to go to OT two years ago.

“Overtime, on the road against a great team,” Brady said. “They had no quit. Neither did we. We played our best football at the end. I don’t know, man, I’m tired. That was a hell of a game.”

New England (13-5) benefited from two critical replay reviews and made its ninth Super Bowl with Brady at quarterback and Bill Belichick as coach.
“This is crazy,” Brady said. “What a game.”

Awaiting them in Atlanta are the Los Angeles Rams, who won 26-23 in overtime in New Orleans for the NFC championship. The Rams last made the Super Bowl in 2002 while based in St. Louis, losing to the Patriots.
It’s the first time both conference title games went to OT. The last time both visitors won conference championship matches was 2012.
Several times, the Patriots appeared to have it won, only to see Kansas City (13-5) come back in spectacular fashion.

Brady, at 41 already the oldest quarterback to have played in a Super Bowl, drove New England 65 yards in 1:24 to Burkhead’s go-ahead 4-yard touchdown with 39 seconds left in regulation. That was enough, though, for his far younger counterpart, the 23-year-old Patrick Mahomes, to take the Chiefs 48 yards to Harrison Butker’s 39-yard field goal with 8 seconds left to force overtime.

It was a sizzling offensive showing in the fourth quarter after defense had been in charge most of the way. Indeed, the Chiefs were blanked in the opening half for the first time all season.
And they never saw the ball in overtime, which along with the two replay decisions might call into play NFL rules and officiating.

No matter to New England, which became the third franchise to reach three Super Bowls in a row. And Belichick now has 30 postseason victories, more than Bill Walsh and Don Shula combined. That Hall of Fame coaching duo also won five Super Bowls; Belichick shoots for No. 6 in two weeks.
COIN TOSS
Reid’s decision to defer after winning the opening coin toss proved unwise as New England had 22 plays in the opening period, and Kansas City had seven. Then, the Chiefs lost the more important toss before overtime. Less than five minutes later, they were headed to the offseason.
UP NEX T
The Patriots head to Atlanta to play the Rams in the Super Bowl.