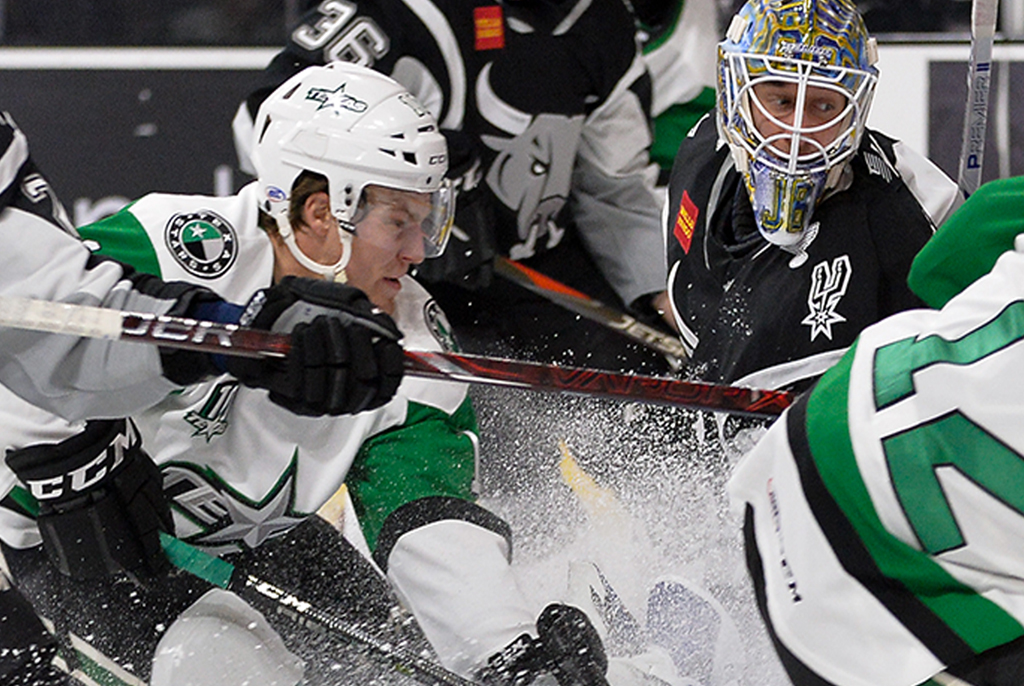 SAN ANTONIO, Texas – The Texas Stars, American Hockey League affiliate of the NHL’s Dallas Stars, ended the 2018 calendar year on the wrong end of a 4-2 decision against the San Antonio Rampage. The Rampage continued their home win streak, extending the streak to six games.

The Rampage opened the scoring on a beautiful tip by Ryan Olsen nine minutes into the game. Olsen set up at the left side of the net and waited for Mitch Reinke to launch a shot from the blue line. The effort flew three feet wide of the net before Olson redirected the puck past Philippe Desrosiers. Late in the period, the Rampage scored again as Austin Poganski notched his fifth of the season on a rebound. The goal put San Antonio up 2-0 with 20 seconds left in the period.

Texas responded with a goal early in the second period. Nicholas Caamano pushed the puck out to center ice for the Stars to spring up the ice. Adam Mascherin entered the offensive zone and found Gavin Bayreuther for a partial breakaway. The defenseman collected the puck and took a shot between his own legs, causing a rebound off the pads of Jordan Binnington. Stars forward Joel L’Esperance was there to slam the loose puck home and cut the lead in half. It was one of 19 shots in the period as Texas outshot the Rampage 39-30 in the game.

Unfortunately for the Stars, all their shots came with no result on the scoreboard but two rushes for the Rampage put the game out of reach. Zach Sanford and Connor Bleakley each scored goals 33 seconds apart to extend the lead. Sanford was the trailer on a 2-on-1 and collected a pass from Sam Blais to make it 3-1 while Bleakley’s shot deflected into the net off the Stars defense.

The Stars carried a power play into the third period and wasted no time finding the net. L’Esperance again connected, this time on a one timer from the left circle. Ben Gleason and Justin Dowling set the play up for a blast by the rookie to score his 17th goal of the season.

Countless efforts in the third period would be stopped by Binnington and the Stars were unable to best the netminder even with Desrosiers on the bench for an extra attacker. Texas’ loss to the Rampage places them 5-3-1-0 against San Antonio this year, as the teams will not meet again until March.