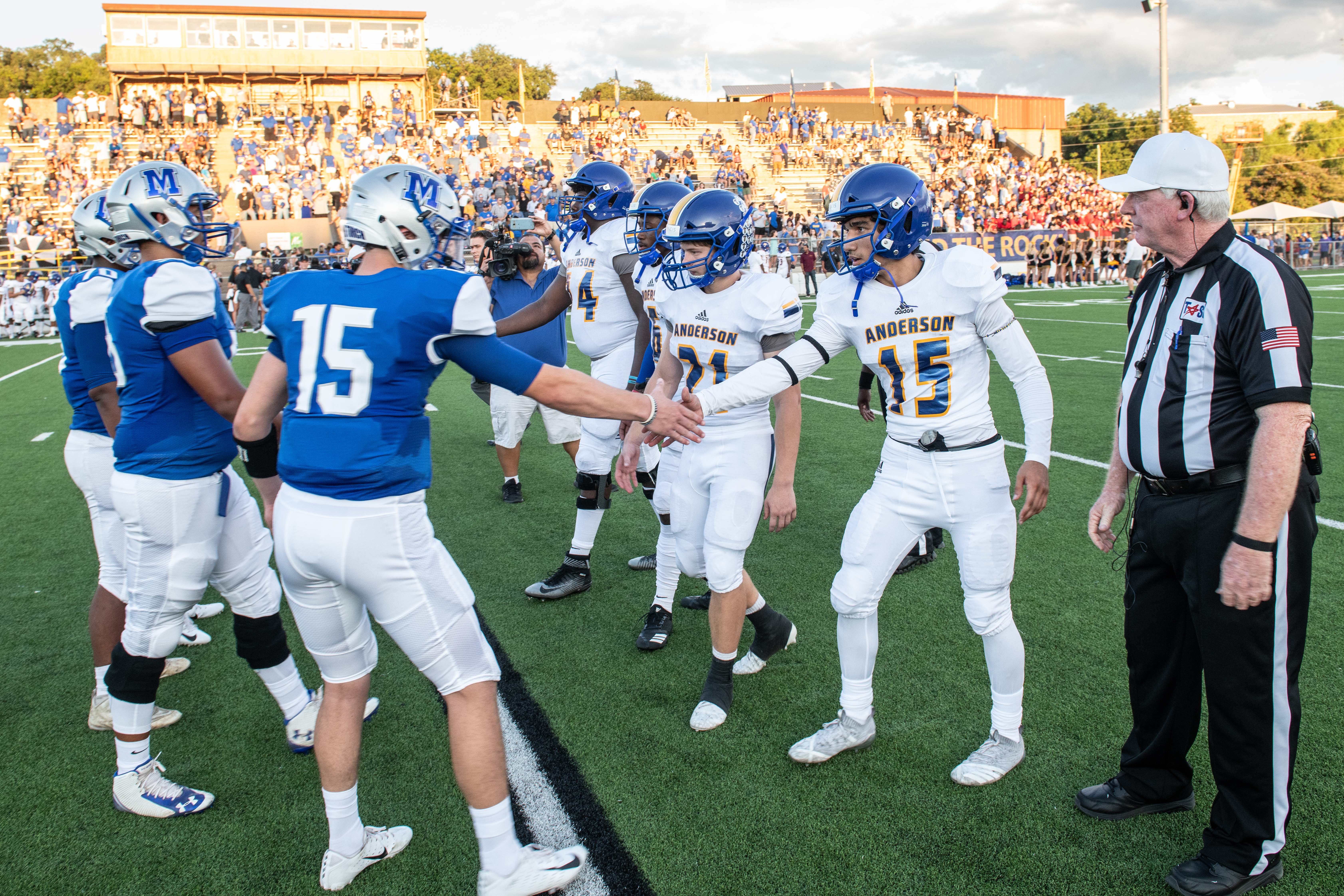 Anderson and McCallum came into the 2018 Taco Shack Bowl with the series tied 8-8.  It’s only fitting that a rivalry that’s been so competitive delivered an all-time classic to break the tie.

McCallum overcame a 13-point deficit in the final minutes to shock Anderson 21-20 in front of a packed crowd at House Park Thursday in Austin to kick off the high school football season.

“Give a ton of credit to these kids,” said McCallum coach Thomas Gammerdinger. “That was unbelievable. (For) an inexperienced group to play like that (is) absolutely unbelievable. (They had) poise and composure. Very, very impressed with this group of young men.”

With about eight minutes left, Anderson faced fourth-and-goal at the two nursing a 20-7 lead. In a decision the proved fateful, the Trojans elected to go for the kill but were stuffed at the one.

McCallum followed with a 99-yard touchdown drive that included a 47-yard burst from junior quarterback Cole Davis and was capped with a 16-yard touchdown run off a jet sweep by junior wide receiver Darius Lewis.

“Holding them on fourth down was big,” Gammerdinger said. “We just kept poised. Man, I kept telling them, ‘just keep competing.’ At halftime, these guys were cool. They understood it’s a long game and we felt like we played a really, really good game, and we just got some breaks to kind of not go our way. Some big plays, some missed tackles, and we just stayed the course and kept chipping, and knew eventually a couple things would break our way. That’s exactly what happened.”

The big game-changer happened on the ensuing drive when McCallum sophomore defensive lineman Connor Boggs sliced through the line and delivered a clean, bone-rattling hit that knocked the ball loose and had Anderson’s running back seeing stars. Junior Alvino Carvajal recovered the fumble, which gave the Knights a short field and a chance to take the lead.

The offense capitalized three plays later with a 17-yard touchdown run by junior running back Jalen Sutton. When Boggs and Carbajal combined for a fourth-down sack on Anderson’s final possession, the two teams’ fates were set. The Knights kneeled the clock out and celebrated like kids after the game.

“It feels great. I’m so happy. I just never gave up and I really believed in my teammates, and I’m glad we got the job done,” Boggs said while cradling the Taco Shack Bowl trophy in his arms. “(On the forced fumble) we got a slant call so I just bit the B-gap and I saw the quarterback hand it off to him and knew that I had him right there, and I just laid a hit on him. All I saw was him fall down, and I looked over, saw my boy Alvino get the ball, and I was just so excited.”

Davis finished with 208 total yards (140 rushing, 68 passing) and Sutton totaled 117 yards on 19 carries, including a 10-yard touchdown in the first half to go with his game-winning score.

For Anderson, season-opening losses don’t get much tougher than that. Junior quarterback Carsten Groos completed 8-of-12 passes for 122 yards and two scores.

His second touchdown pass was an RPO throw to the flat where senior running back Coy Fullmer somehow managed to stay on his feet while fighting through three McCallum defenders and turn a short gain into a 32-yard score. Fullmer also had 66 yards on 16 carries, including a 40-yard touchdown dash early in the third quarter.

Senior fullback Tondrict Givens rumbled for 93 yards on 10 totes but couldn’t punch it in on fourth-and-goal in the final frame. Junior running back Rivas Wheatley gained 77 total yards (40 rushing, 37 receiving) and scored Anderson’s first touchdown on a 24-yard reception where most the yards came after the catch. But he also had the costly fumble that set up McCallum for its game-winning score.