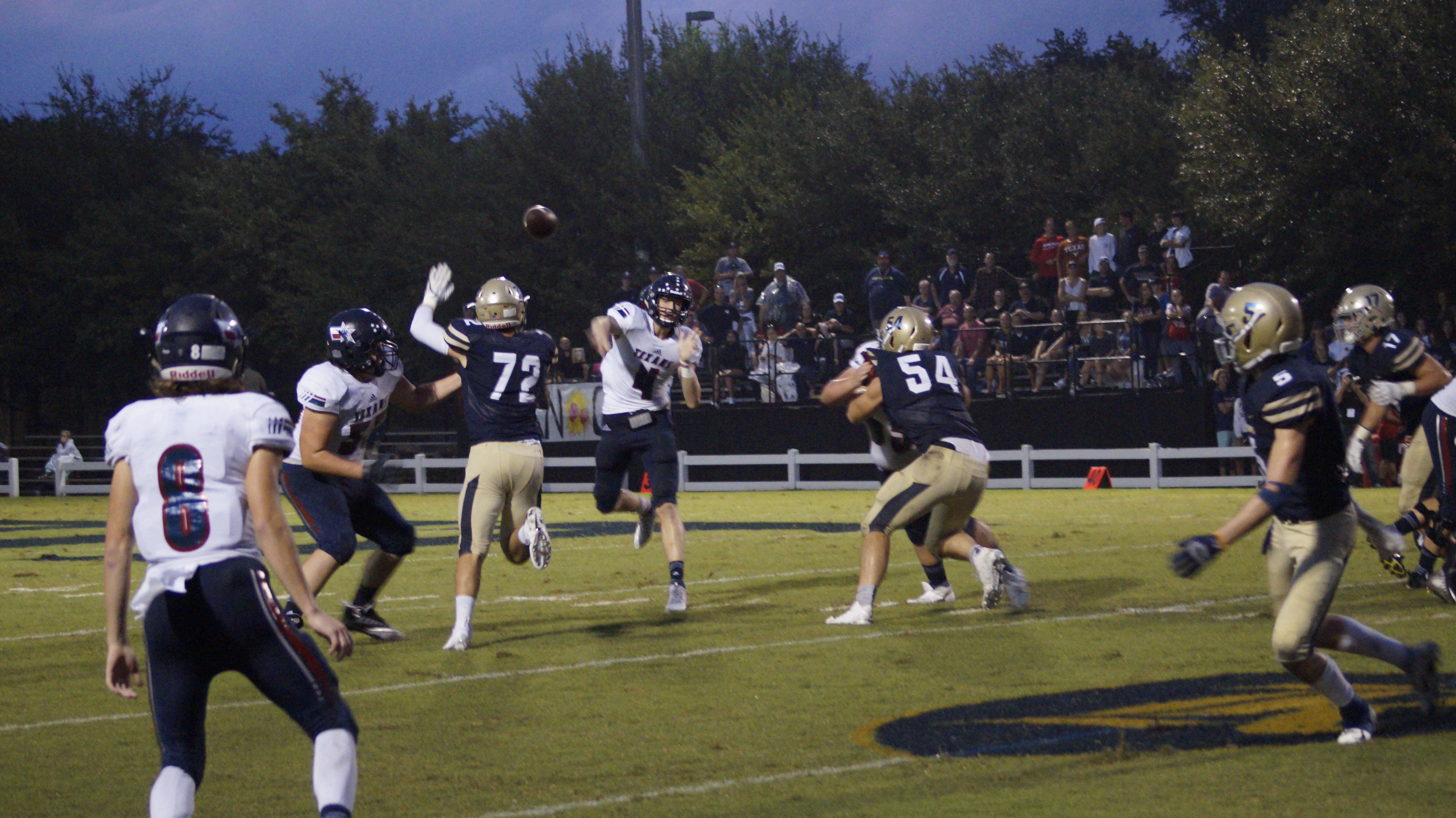 Regents had its 26-game regular season win streak snapped last week by San Antonio Central Catholic. But the Knights didn’t let that get them down. Instead, they learned from the defeat and used it as fuel to start a new run of victories in a 48-13 demolition of Wimberley Friday at Knights Stadium in Austin.

“We had a great practice week this week, but we had a great practice week last week,” said Regents coach Beck Brydon with his dry sense of humor. “The lesson there is just because you have a good practice week, doesn’t mean you’re going to have a good Friday night. But I think that the focus was a little sharper this week. We just went back to fundamentals and basics on a lot of things… We stripped down our playbook quite a bit this week. We used a lot of basic stuff and we repped a lot of basic stuff over and over and over again to ensure that what we did last week was not going to be repeated tonight.”

Regents doesn’t often get the chance to play a public school. The Knights last game against such a program was Florence in 2011. So when two-time state champion and 2017 Class 4A Div. I state semifinalist Wimberley came to town, five-time private school state champion Regents took advantage of the opportunity with 31 unanswered points to finish out the game.

“I think we were extremely motivated, especially after last week. We really didn’t play a clean game, played super sloppy, and them being a public school, and a bigger school, just totally motivated us even more to focus up, lock down and get our stuff right this week. I’m really proud about how everyone played and responded this week,” said junior quarterback Wilson Long. “We never want to lose, but in a way it was what we needed. I think we had gotten a little bit too high on ourselves. I think it was a good reminder that we’re human. We make mistakes, too. We’re not perfect, obviously, and I think that was just a great way to reset our focus.”

Long guided the offense with 262 total yards – 93 on the ground and 169 through the air. He completed 11-of-20 passes with a 14-yard scoring toss to senior wide receiver Jackson Mountain. Junior running back Andrew Adams added 114 yard and three touchdowns on eight totes.

“He’s a special player,” Brydon said of Long. “He’s got a great arm. He’s most dangerous with his feat, and he had a great game. With him, it’s shotgun for us on any given play, something special can happen and we know that.”

The defense held Wimberley scoreless for the last 32 minutes of play as the Texans mustered only a shade above four yards per play. Junior defensive lineman Dru Benson had back-to-back sacks at a crucial point in the third quarter that tilted the momentum decidedly in the Knights’ favor