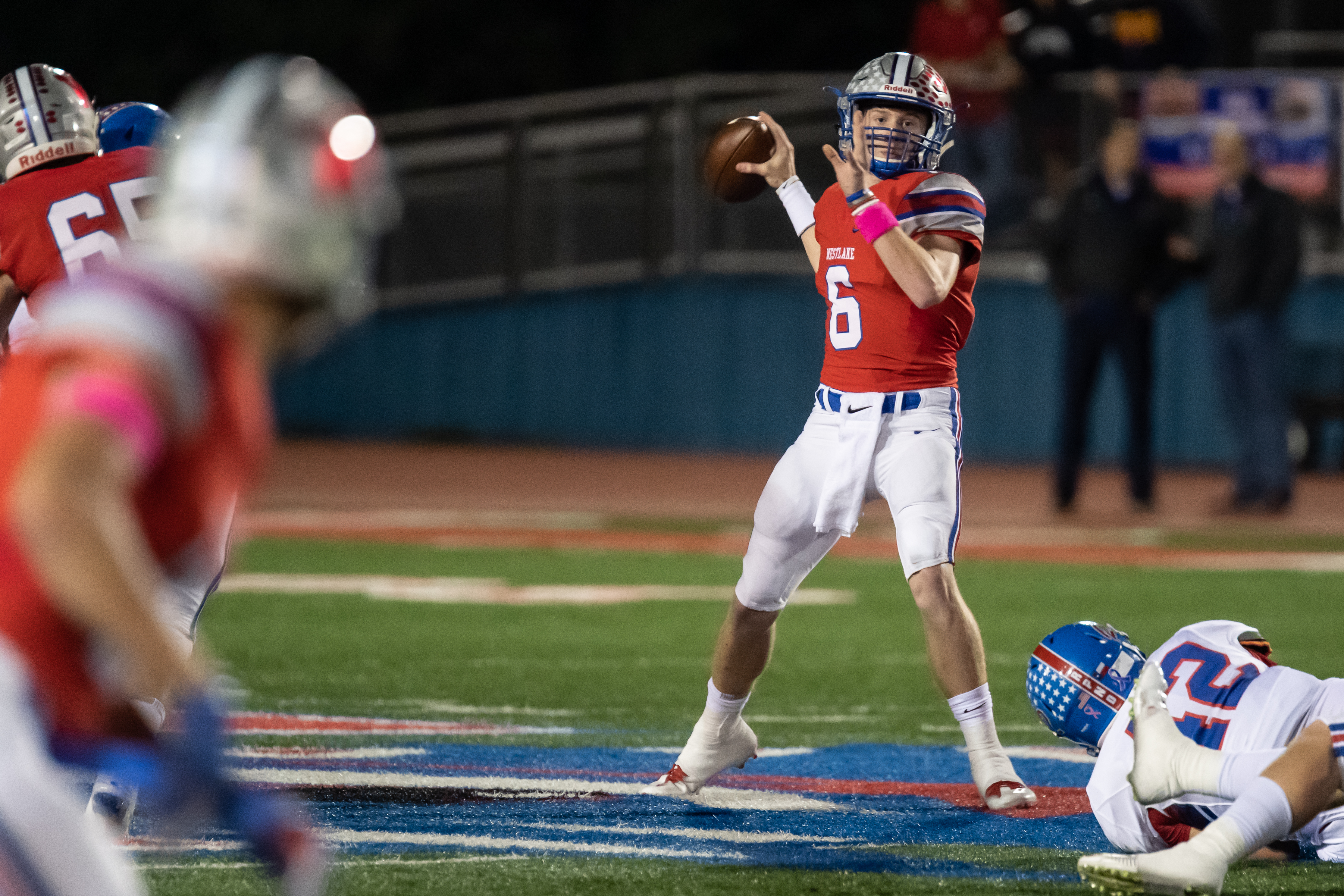 Westlake raced out to a monster first quarter lead and never looked back in a 70-14 beat-down of Hays Friday at Chaparral Stadium in Austin.

The Chaps (7-1 overall, 6-0 District 25-6A) got three touchdown passes from senior quarterback Taylor Anderson and a pick-six from senior linebacker Ben Pankonien to build a 28-0 advantage in the opening period.

From there, it was smooth sailing as the Chaps were able to empty the bench late in the third quarter of a game that was supposed to be more competitive.

“(Getting off to a strong start) is what we talked about all week because against a team like that you never know how often you’re going to get the ball back,” said Westlake coach Todd Dodge. “Every possession has got to be crucial. Sometimes, it’s running the ball, keeping the ball away from them. Tonight, it was we got the matchups we wanted in the passing game. We were able to exploit that.”

Hays (7-1, 5-1) came into the game undefeated but had yet to play an opponent of Westlake’s caliber. The Chaps quickly put the Rebels back in their place.

Typically reliant on a stingy defense and powerful run game, Westlake decided to let loose on this night and Anderson threw for more yards (199) in the first quarter than he had in a single game all season.

He finished the evening 11-of-14 for 260 yards with five touchdowns and no turnovers. Senior wide receiver Mason Mangum led all pass catchers with five receptions for 169 yards and three touchdowns. Junior Jackson Coker had two highlight-worthy scoring grabs in the first half and finished with three catches for 60 yards as the extra attention the Rebels gave to Westlake’s leading wideout, senior Penny Baker (two receptions, 14 yards), freed things up for his speedy teammates.

“They ran man coverage a lot, which can be effective if you have the defensive backs for it, but I don’t think any team has the defensive backs for our four wide receivers,” Anderson said. “If they try to double one guy and leave another guy in man coverage, it’s going to be a touchdown every time and I think tonight showed for that… (Mangum and Coker) are both track guys. They run 4.5s. They’re the fastest guys I’ve ever seen. I trust them every time beating a guy one-on-one even if he knows he’s going deep.”

Westlake’s defense proved ready for the challenge of Hays’ run-heavy offense as they forced five turnovers (three interceptions, two fumble recoveries), had four fourth-down stops and held Hays to 265 yards on 63 plays for 4.2 yards per play.

The first two turnovers were especially crucial. Hays had driven into the red zone on its first possession before senior safety Drew Webster got in the backfield and forced a botched exchange which he jumped on to extinguish the threat.

Down 21-0 late in the first period, Hays went away from its base slot-T look and instead threw the ball out of a shotgun, four-receiver set. The results, however, were catastrophic as Pankonien read the quarterback and stepped in front of his pass for a 33-yard interception return for a touchdown that felt like a Mike Tyson first-round knockout punch.

“All year long you watch (Hays) and they put 15, 16-play drives together, and you look up and the first quarter is over with. Hats off to our defense for not allowing that to happen,” Dodge said. “It helped that we played against a similar type of offense last week. We prepared for Del Valle and played that game, so I think that’s part of it. The second thing is we got a lot of veterans on defense. A lot of kids that got a lot of pride. A very intelligent bunch over there (that’s) very much in tune with what (defensive coordinator) Tony Salazar is putting into a game plan and we came out and executed.”