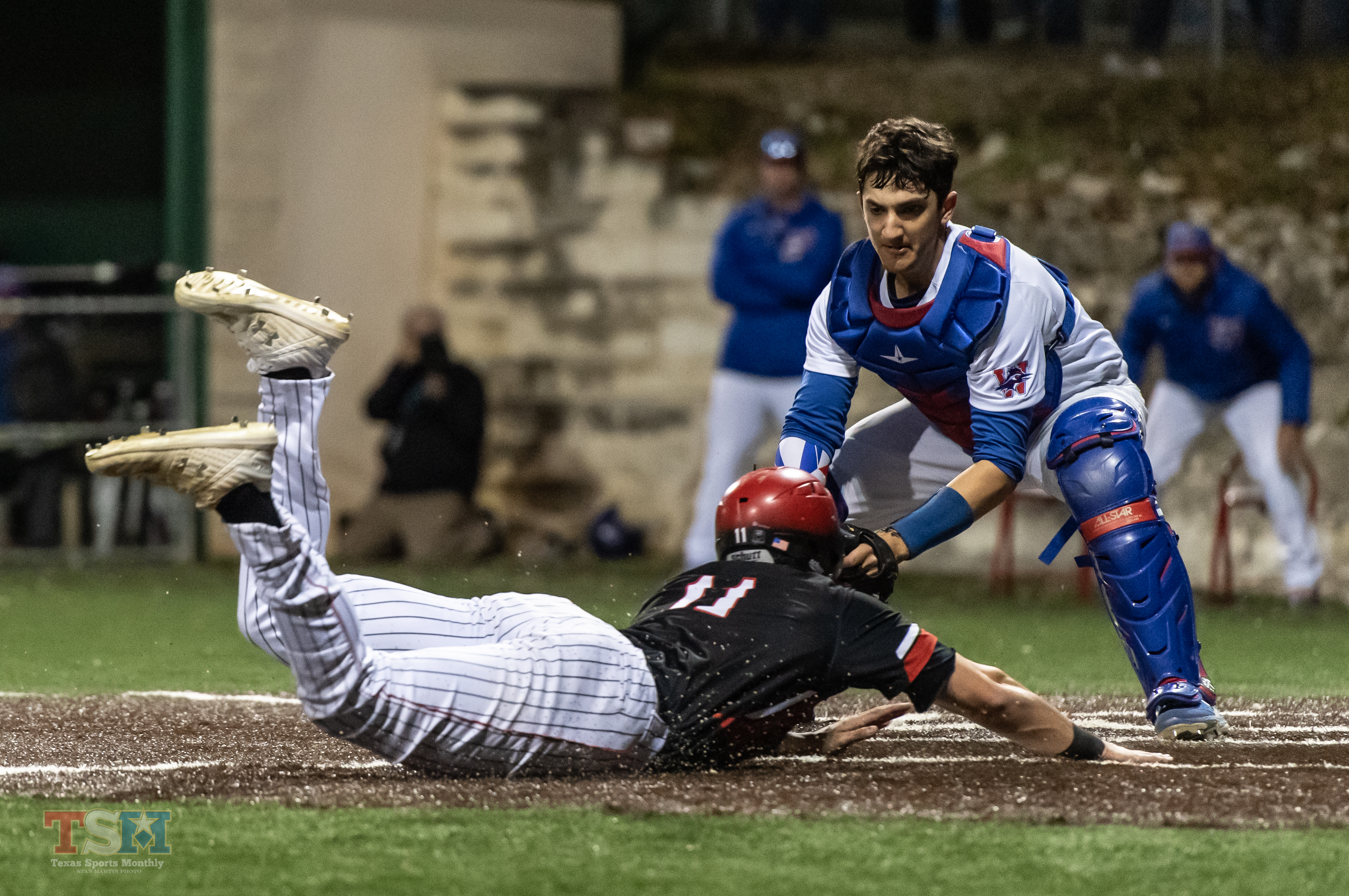 On a chilly night in mid-March, a large crowd witnessed some of the country’s best high school baseball when the visiting Lake Travis Cavaliers beat the Westlake Chaparrals 7-3 in seven innings. Lake Travis moved to 16-0 (5-0 in District 25-6A), and the Texas High School Baseball Coaches Association now ranks the team at first in the state in 6A. (The same association ranked the team second in the state in preseason polls.) With the loss, Westlake fell to 15-3-1 (3-1 in District 25-6A).

“It’s always exciting [playing your cross-town rival]. You can go throw everything out the window,” Lake Travis head coach Michael Rogers said. “Great energy tonight, great crowd. Both teams needed to play in that environment to get ready down the road, so fortunately we came out on top. Our district is much better than it was in the past. Both teams needed this kind of game to get ready for the playoffs, which is still a long way away, but that kind of stuff pays dividends down the road.”

Lake Travis six-foot-six-inch starting pitcher Jimmy Lewis, who has committed to play next year at Louisiana State University, was absolutely dominating with his 93-MPH fastball. He got the win pitching 5 and ⅔ innings, giving up just two runs and five hits while earning 12 strikeouts. In four innings, Westlake’s starting pitcher, senior Dylan Savino, allowed three runs and four hits, accumulating six strikeouts. He got the loss on the night.

The game was relatively quiet going into the third inning: Westlake had a 1-0 lead, which resulted from a solo home run from senior Bobby Serfass. And then when Lake Travis had two runners on in the third, junior shortstop Parker Guerin smacked a three-run home run to take the 3-1 lead. Westlake pitcher Savino then threw a scoreless fourth inning before Westlake relievers would finish the last three innings and give up another four runs; and three more Lake Travis relief pitchers would come in and keep the Chaparrals offense from scoring for the rest of the game, finishing what Lewis started.

“I was just trying to get ahead in the count,” Lewis said, “and use my curve ball to my advantage ‒ because they were sitting fastball ‒ and just keep them off-balanced.” On the team being ranked highly in the state and possibly having what it takes to go far in competition this season, he said, “We don’t want to listen to outside noise, and we have to just play as a team, keep up the camaraderie and keep going.”

Offensively, Lake Travis dominated as well. After Guerin’s three-run bomb in the third, the Cavaliers pounded out several more hits in the games, including doubles from seniors Austin Plante and Bretty Baty in the fourth inning, and then a bases-loaded, two-RBI double from Lewis in the top of the sixth.

Westlake hitters put up a fight, though: Aside from Serfass’s solo bomb in the second inning, senior shortstop Peyton Sanderson doubled and junior second baseman Ford Elliot singled in the first; senior outfielder Denton Apple had two doubles, one in the second, then another that drove in two runs in the fourth.

“I was proud of our kids,” Westlake head coach JT Blair said. “We were ready to play. It was a great performance by a great high school pitcher. It’s just one game. We’ll put that one behind us and get ready for next week. Our district is tough from top to bottom. Our guys are up to the challenge.” The two teams play each other again Friday, April 12, 7 p.m., at Lake Travis.