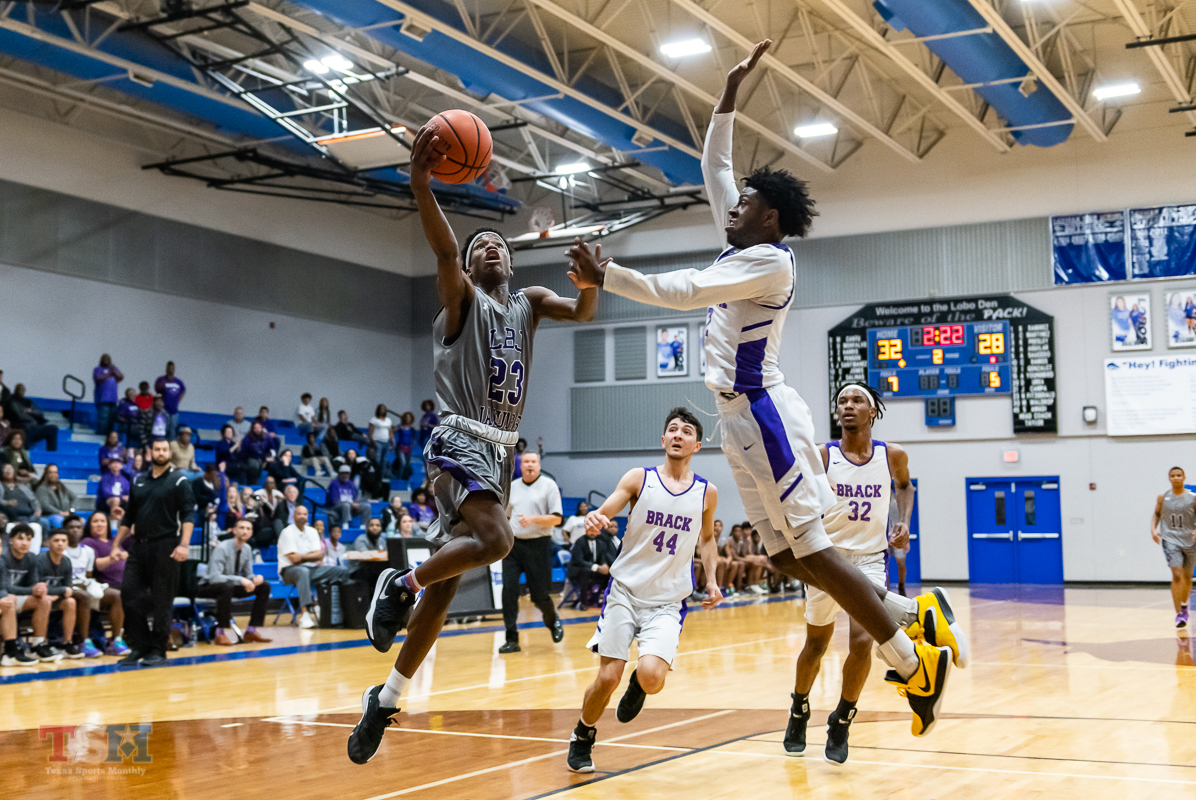 A brisk cold wind breezed its way through this particular Saturday morning. A student walked alongside the building struggling to keep warm. It was 9 am and the LBJ Jags prepared for the playoffs, winners of the District 25 5A division, they ran through their half-court offense repeatedly. The basketball bounced, the coaches yelling instruction from a distance, it was time to elevate their game for playoff basketball.

The team graciously welcomed your fellow writer at the practice facility and one of the coaches came up giving a rundown of the team. He started pointing with Brian Batts, senior guard, playing his last year for the Jags who has chosen to attend college at University of Texas at Permian Basin to play football. Batts earned All District Utility Player of the Year playing both sides of the ball and also chosen for first team All-District this basketball season. Batts handled the ball with an efficient scoring mentality.

The next player looked at was Junior Jordan Teal. As a sophomore, Teal guarded well enough to earn Defensive MVP. He played the outside confidently shooting his mid-range shot at the elbow.

Coach Roland approached, we shook hands, and began to dive deep into the quality head coach that he is. He teaches Health at the high school and believes that the kids should feel important, they write their name on a piece of paper and bring to class each and every day. Coach’s main ideology is his students and athletes graduate high school. The relationship he develops through his athletes has come over time. He keeps in touch with former Jag Kerry Hyder who played college at Texas Tech and now currently plays for the Detroit Lions recovering from an injury. He has this paternal complex about him that reveals his intentions. A lot of players have looked up to him as they are raised by single mothers. He offers guidance, structure, and most of all discipline.

Coach looks over to the speaker blaring hip hop music and chuckles. He comes from the old school listening to Marvin Gaye and The Temptations. The modern day music genre is an unique one.  The fundamentals aspects are what he preaches and he is confused on the mentality of the flashy athlete. What does it benefit? Why the need for it?

The assistant coaches whistled for the shooting drill where each player lined up at two lines at each basket with time on the clock and shot. You could hear one of them screaming “legs” as a few shots were coming up short. The tiredness was taking effect but they pushed through it in their effort to shoot the basketball when the game was on the line. Mental toughness comes into play when the body is drained and technique is weakened.

They ran one more circuit Coach Roland shook hands, then walked over to center court where the team circled together. It was hard to listen on his words but you could see the teams focus on every sentence. Two days before their first playoff game these next two days were important; scouting reports had to be read, healthy eating had to be consumed, but most of all they had to understand this could be their last practice.

They didn’t want this season to end and for some it was their last few games especially for starting senior Rodrick Roberts, “It’s my last year, I want to win state.”

And for others it’s just like this,” I want us to play as a team and we have seven more games to play. It’s deeper than basketball.”

Yes it is. Especially for the LBJ Jaguar basketball team