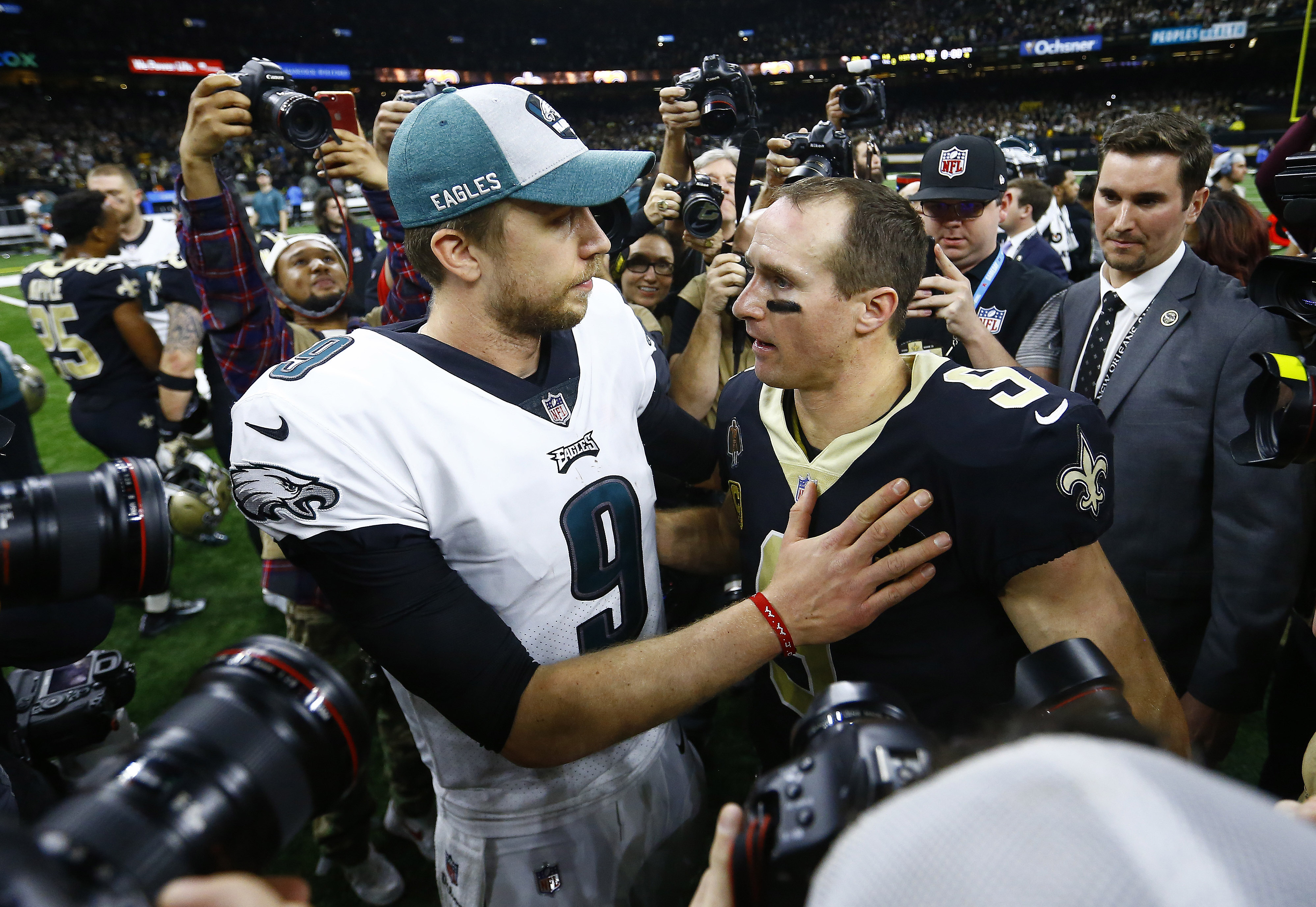 The Saints, who entered as the NFC’s No. 1 seed, took the defending Super Bowl champion’s best punch before turning the tables in time to record a 20-14 victory at the Mercedes-Benz Superdome.

Philadelphia wide receiver Alshon Jeffery committed the evening’s biggest gaffe when he let a late pass from Foles slip through his hands in the red zone. New Orleans’ Marshon Lattimore was right there for the game-clinching interception.

It was a valiant effort by the Eagles, who had every bit of momentum surging in their direction during the first quarter. After Brees’ first throw was intercepted by Cre’Von LeBlanc on a home-run toss to Ted Ginn, Philadelphia marched 76 yards in seven plays to vault ahead.

Foles struck on a play-action pass by dropping in a perfect throw to Jordan Matthews for a 37-yard touchdown toss.

After the Eagles forced a three-and-out by the Saints, Foles directed a 10-play scoring drive that was capped by his own 1-yard dive across the goal line. New Orleans followed with another punt after looking completely out of sync on offense.

Lattimore may have sparked Brees and company with his first pick of Foles, which set up a 12-play, 79-yard march to the end zone. The drive featured a successful fake punt and ended with a clutch 2-yard scoring toss from Brees to Keith Kirkwood on fourth down.

The Saints tacked on a 45-yard field goal by Will Lutz to trim the Eagles’ lead to 14-10 at the half.

New Orleans then began the third period by forcing an immediate punt and embarking on a marathon 18-play, 92-yard drive. Brees hit Michael Thomas on a 2-yard TD pass to help put the Saints ahead 17-14.

Thomas shredded Philadelphia’s secondary after intermission and finished the night with 12 receptions for 171 yards.

Lutz split his next two field goal tries, and New Orleans’ defense stood tall when it absolutely needed to. Foles had driven the Eagles all the way to the Saints’ 27-yard line when a high pass zipped through Jeffery’s mitts and was snatched by Lattimore at the 19 with 1:51 left on the clock.

It was a bitter ending for Foles and the Eagles, but Brees will carry the Westlake alumni torch this week in an intriguing NFC Championship matchup.

The NFL’s all-time leading passer will look to advance to his second career Super Bowl Sunday when the Rams head to New Orleans for a collision of the conference’s top seeds.

NOTES: Brees is now 2-0 all time in head-to-head postseason games against Foles. The Saints defeated Foles’ Eagles 26-24 in a 2014 wild-card contest in Philadelphia.

Brees is the lone quarterback to have a winning record against Foles in the playoffs.